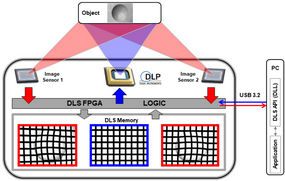 The schematic of the DLS architecture with the major data flow is shown in the picture. The ViALUX FPGA logic controls both the high‑performance DLP chip for fast and precise pattern projection and the image sensors for digital imaging. In that way pattern generation and image recording are precisely synchronized, also for partial sensor readout in a region of interest. Frame rates vary from 166 fps to 5.000 fps (ROI) for each camera in parallel.


A sequence of user-defined projection patterns is uploaded into the DLS memory (RAM) and the data can be used for a single projection or for a projection loop. The illuminated object is recorded by the sensors and the images are buffered in the on-board RAM that holds up to 1.592 pictures (10 bit, 1.920 x 1.200 pixels), ready for download to the PC for further processing.  All data flow operations are executed by one FPGA device enabling the outstanding real-time precision.

Streaming data to and from the on‑board RAM is realized by the USB 3.2 SuperSpeed transfer implemented on the DLS system. The upload is further enhanced by lossless on‑the‑flight compression and pixel binning is available as an option for image download.

An easy‑to‑integrate application programming interface (API) supports rapid system development. The DLS API functions are designed to build an application with a minimum of programming effort providing maximum control capabilities at the same time. The user can define any type of pattern sequence that may differ in bit depth, number of pictures, and frame rate. The DLS‑API is implemented as a dynamic-link library (DLL), it is portable and can be used in various programming environments.


The DLS‑2 Module supports two image sensors and one DLP chip. All three chips are in a fixed position. The customer can choose a configuration for either 600 mm or for 1000 mm working distance. The base length between the two imaging lenses is 160 mm.

Long lasting high‑power LEDs form the light source for the two DLS‑Modules. There are four wavelength options provided for both models to support a variety of applications in the visible and near‑infrared spectrum: White, Blue 460 nm, NIR 730 nm, NIR 850 nm.
The product specification is here. The white light source specification sheet is shown here to.

An additional software package zSnapper® SDK (zSn.dll) is available as an optional extension for DLS Modules enabling high-speed and high‑precision 3D coordinate acquisition. This powerful 3D measurement software has been developed for the ViALUX 3D scanners and is now released on module level. It delivers (x, y, z) coordinates directly and automatically for use in 3D machine vision.

Added to your cart: